Thirteen days left in the campaign and after three rough days, my book bounced back up and now it's in the front page.

I have to say, I have been bugging people left and right. I'm mostly a FB socialite, so I've been shamelessly tagging everyone. I hope I'm not annoying people too much, but I have to look at this with perspective. It's only for 30 days! So let's make them count.
If I don't get chosen to be published through Kindle Scout, it won't be because I didn't give it my all. It might be for other reasons; like my story isn't what they're looking for now.

So what happens if I don't get chosen by Kindle Scout to be published?

Nothing. I'll still self publish.

Why not try the traditional publishing way?
Because writing, though important for me, is only something I do early in the mornings while my whole family is still asleep. Right now, writing for fun, at my own pace, is the right thing for me to do. That's why I'd like to go the Kindle Scout rout--because it won't change any of that. All it will do is increase my exposure.

Full steam ahead then!
If you'd like to read the first chapter of Indigo, read here.

#Hashtags# To Get Attention 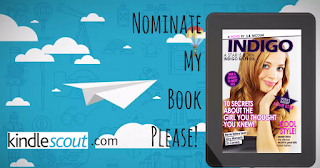 Half way mark! Woohoo! It's been an interesting ride. The book fell of the "HOT" list for a few days, but now I'm back again.
What happened? Well, we have to take into consideration that we just celebrated Thanksgiving. But I fear I can't use that as an excuse because other books remained hot and trending.
One tactic that I will attribute the turn around are hashtags. I don't know why I hadn't thought about that before, but hashtags are very useful as a way to get your post on several different places. These are the Hashtags I used. Let me know if you know of any others that have worked for you.
#bibliophile
#yareads
#yabooks
#YA
#bookaddict
#amereading
#readmore
#MGLit
#FlashFic
#ACFW
#FridayReads
#MustRead
#Litchat
#StoryFriday
#TeaserTue
#Kindle
As always, your nomination will be appreciated! 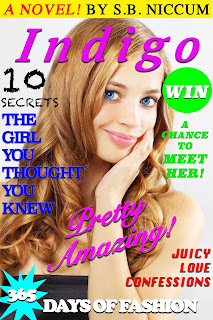 Part of the creative process is creating a book cover that conveys what the book is about. This is the cover that I did to put my vision before the cover artist. He in turn grabbed my vision and created a more polished version of my cover. 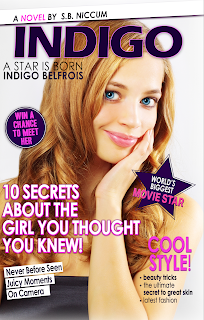 The end result was this beautiful cover.
As you can see, I wanted the book cover to look like a teen fashion magazine because my main character is a teen movie star who would no doubt be in magazine covers.

Get A Taste: Indigo Prologue and First Chapter